The Wolf in League Blog Tour and Giveaway

WE HAVE A WINNER! 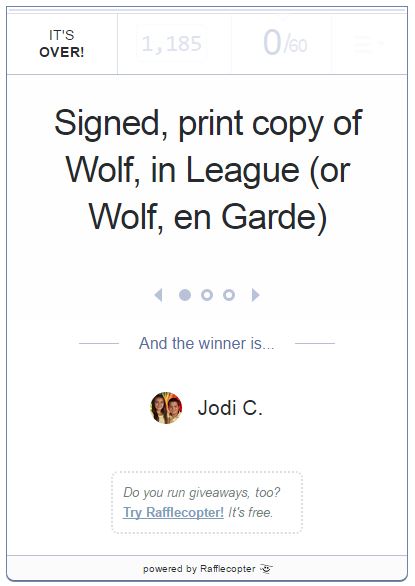 And a huge thank you to EVERYONE that joined in the tour, and EVERY ONE of the amazing sites that hosted me. It was great to share with you. 😀

If I managed to spark your interest, don’t forget that you can get your very own copy of Wolf, in League, or any of the other Wolf series novels, right here:

THE WOLF SERIES, by AF Henley, at Less Than Three Press

It’s been months since anyone at the Committee has had any contact from the O’Connell family or their pack members, and they are not happy. Suspicious of the activities that took place in D.C. and determined to find out what the wolves are up to, the Committee recruits one of their newest residents, Doctor Matthew Dietrich, to play the part of neighbor and infiltrate the family.

Matthew has always been a keep-to-himself kind of person. Though idealistic and optimistic, he prefers to work in solitude, at night, while he researches the findings that he hopes will one day change the world. When he’s approached by the executives of the Center, he has no idea why they’d choose him. And to say he is skeptical over the concept of men that can shift into wolves would be an understatement. Until he meets his new partner, the man that will play the part of his “husband” in the Committee’s scheme, Doctor Gavin Strauss.

Talk to me... Cancel reply