My newest novel, We Three Kings, is a story about resolution, redemption, and faith — and it dropped at your favourite online dealer on March 1st, 2017.

… We celebrated with a mini blog tour and giveaway, and now we have our winners! 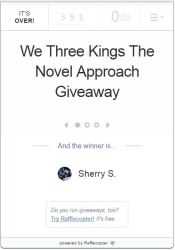 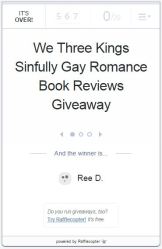 A huge thank you to the hosting sites:

So, what is We Three Kings?

We Three Kings is a gay contemporary romance (contemporary in the timeline of 1982, anyway) that follows a successful businessman, his two business partners, and a blast-from-the-past that none of them would have ever expected. Now they’re all going to have to come to terms with who they were, what that did to them, and how that past has impacted not only their presents, but their futures. 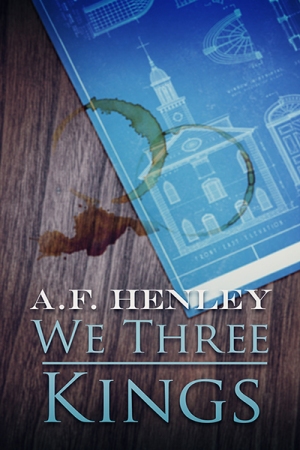 Chicago 1982 is a goldmine for the construction industry, and Eric and his two business partners are thriving. Once nothing more than orphans in a Catholic boys’ home, they’ve overcome poverty and abuse to obtain success. Now living the lives they once only dreamed of, they’re sure of one thing: they will never look back.

Then the past returns, by way of a cheap polyester suit and a smile Eric has never forgotten—and all the dark memories come crashing back. Lucky for him, Jimmy has no idea who Eric is, or who Eric used to be…

Thank you to everyone who played along. I hope you enjoyed the tour!

All my love, AF Henley ❤

We Three Kings – now available at: Purchase Link – LT3 – and all your favourite online dealers!

We’ve got some winners!

for the Breaker: Exile, Volume 1 blog tour and giveaway!

Kelly and I have had an amazing time sharing excerpts and comments with you all. I can’t even begin to say how overwhelmed and grateful we are with the feedback and responses everyone has given us. Thank you! You are ALL winners as far as we’re concerned! 😀

For a refresher on the terms and conditions, please scroll to the bottom, and a gentle reminder to everyone to contact me via email at a.freedom.henley@gmail.com with your mailing instructions within 3 days (Tuesday, February 7th) so you don’t miss out on your prize.

The winners of our host-site giveaways for the starfish anklets:

And FINALLY… the grand prize WINNER!

Reminder: our Grand Prize consists of:

A signed, print copy of “Breaker: Exile, Volume 1”
a $20.00 gift certificate to Less Than Three Press
and a coordinates bracelet with the Believe. Seek. Prove. reminder so you can always find your way back to the island of Exile! 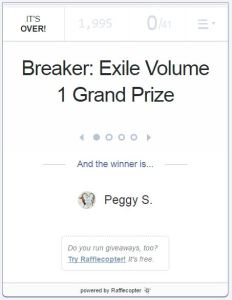 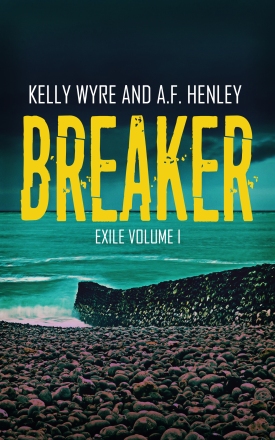 In the wake of several near-cataclysmic events, humanity created the Cure, a DNA-altering antidote to death by disease and old age. But all cures come with side effects: a small percentage of the population develops a wide range of powers, some of which are lethal to others, and some which are lethal to the wielder.

These people are called the Estranged, hunted and shunned, safe only on the Island of Exile. It is here that Kaeva and Eddie meet—and where they set a prophecy in motion, quite possibly sealing their own demise, and even the end of Exile.

This giveaway will run throughout the blog tour, and finish at midnight on January 31st, 2017.Winner must be of legal age, and legally able to accept the prizes as awarded. Void where prohibited by law. By entering this giveaway you are confirming your eligibility. Grand prize entries will be collected by Rafflecopter on each tour stop. There will be one winner, tour-wide. Individual giveaways will be collected via comment at each tour spot, and winner will be chosen via random number draw. For each giveaway: no purchase necessary to win, and odds of winning are determined solely by the number of eligible entries.

Winner must respond within seventy-two hours of the congratulatory post. Posts will be made on my social media platforms (AFHenley.com, KellyWyre.com, Tumblr, twitter, Facebook, and Google+). Winner may or may not be announced on the blog sites, in accordance with that site’s preference. It is the responsibility of the winner to watch for the announcement, and a new winner will be redrawn if there is no response.

This contest is not sponsored by WordPress, Amazon, Facebook, Goodreads, twitter, Tumblr, or any of the sites wherewith the giveaway has been posted.

By entering this giveaway you agree to hold AF Henley, Kelly Wyre, and our designates harmless, should something go awry with either contest or the prizes awarded.

Thank you everyone for playing along with the tour!

or your favourite online provider!